Fighting within Jomsborg is taught using the Jomsviking system of live steel combat. This is non-choreographed, real-time sparring using steel weapons (rebated) and, as such, regular training is required to ensure the safety and skill of the fighters. Emphasis is placed on proper form, body mechanics, spatial/situational awareness, and footwork. Training is carried out in structured sessions, in comfortable everyday clothing, with necessary protective gear.

As with any type of competitive sport fencing, there are reasonable boundaries set to ensure combatant safety. There are four such rulesets used within the Jomsviking system, each with limits tailored to the objective of the style: 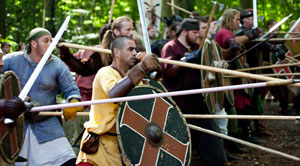 Western style combat is tailored to the safety regulations instituted at many of the large re-enactment events that take place in Western Europe, such as at Moesgård and Trelleborg. With hundreds of fighters on the field at once, safety is of the utmost concern at these types of events, and so valid targets are limited to those areas of the body least likely to cause serious injury. Under this ruleset, strikes to the head and neck area, hands, feet, and lower legs are not allowed, with valid target areas being above the knees (including the groin), torso (minus direct blows to the spine), shoulders, and—depending on the event—sometimes the upper arms.

Strikes are expected to be clean and decisive, but not forceful. Fighters train proper body mechanics for pulling blows and applying the proper amount of force for the style—blows should be strong enough that they are felt in the heat of combat, but not so strong as to cause injury.

Eastern style combat, like Western, is tailored to European re-enactment events, but those that take place in Eastern Europe, such as Wolin. Eastern style fighting represents a slight, but significant, expansion upon the boundaries laid out for Western style. In Eastern style combat, blows are full-strength, and strikes are allowed to the crown of the head (face, neck, and side of head are still disallowed out of safety concerns). As would be expected, some form of body protection and a helmet are required for sparring under the Eastern ruleset. 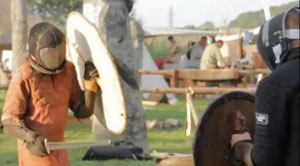 Huscarl combat was started in 2000 by current Jomsborg Jarl Alban Depper along with input from Roland Warzecha, Christoffer Cold, and Anders Halseth. The goal of Huscarl is understanding how to move effectively in a realistic, armed fight, and to better understand the use of the weapon. It is for people who want to learn more about fighting skills.

Under the Huscarl ruleset, all targets (including the face) are valid and any strike that would realistically end combat (such as decisive strikes to hands or feet) will end the match. Huscarl fighting has much in common with HEMA style fighting (though there is no surviving treatise from the Viking Age, inspiration and information can still be had from slightly later treatises such as the MS I.33), and Jomsborg members occasionally compete in HEMA tournaments. When engaging in Huscarl sparring, a HEMA mask and proper protection is required. 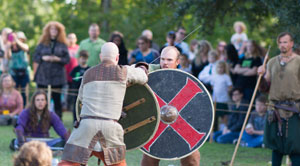 Occasionally, Viking Invasion is called upon to perform at various local events, such as Austin Celtic Festival and the San Antonio Highland Games. Performances at these events require a special kind of combat that plays to the audience. The action remains unscripted and non-choreographed, but weapon strikes are exaggerated for theatric effect, and there is more weapon-to-weapon parrying and such than would be present in a true competitive sparring match (audiences love the sound of steel on steel!); this is done not only to increase audience enjoyment of the fight, but also to help fights last a bit longer. Training for show fights includes theatrical “kills”, telegraphing of large movements, and fighting at increased measure.